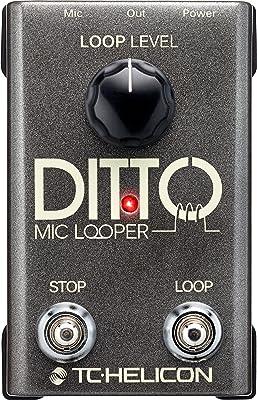 The thing that separates Ditto pedals from the competition is their minimalist style. Many looper pedal manufacturers attempt to cram in so many features that they end up having more dials and buttons than the computer console from the original Star Trek series. In contrast, Ditto pedals are simple, well-presented and compact. The Ditto Miclooper follows this aesthetic down to a tee, with just two footswitches and a single dial on the face of the 5.4 by 3.5 inch (140 by 90 mm) unit. Throw in the typically sleek Ditto look and the result looks polished, professional and inviting.

The Ditto Mic looper, like the original Ditto, doesn’t have much of a feature-set. The undo/redo function is pretty much all you get aside from the very basics of looping. This is a great feature, allowing you to erase and replace any mistakes you make on the last overdub, and even opening up the songwriting potential of the looper. You could add backing vocals for the chorus, for example, remove it for the verse and then have it ready to bring back in for the next chorus. Both these are controlled by holding the “Loop” footswitch in the down position for a few of seconds.

The two footswitches control core looping functions (recording, playing back and overdubbing) along with stopping your loop, undoing (or redoing) your last overdub, and clearing the current loop. In practice, this means you hit the right switch – rugged and metallic so you don’t have to worry about breaking anything mid-performance – and start singing, beatboxing or playing your instrument, and then hit it again to play back what you’ve just done. The loop continues playing for as long as you want, and you can add additional layers of sound by pressing the pedal again and recording an overdub.

The only catch is that there isn’t anything else on the Ditto Mic looper. The Ditto X2, for example, added reverse and half-speed to the basic Ditto blueprint, but there are no vocal effects built into the Ditto Mix. Similarly, the Ditto X2, X4 and Ditto Stereo all had a single slot to store your loop – as well as remembering whatever you’re currently working on, like the Ditto Mix does – but this is missing from the Mic too. If they’d provided that option, you could have used the USB port to backup your stored loops to your computer, or to import a backing track to sing along too.

If you’ve never tried a looper before, the above may seem confusing, yet it doesn’t take a long time to get to up to speed with the pedal. The Ditto series is great for newcomers, because it strips away all the extra stuff that can overcomplicate things and just does the core task of looping really well. One footswitch handles the looping features, and the other stops and clears the loop.

The big question is whether the Ditto Mic looper does enough for vocalists, singer-songwriters and multi-instrumentalists. When you get right down to it, the Ditto offers a fairly limited collection of looping functions and has XLR inputs and outputs. The cherries on the top of this unimpressive feature set are the minimalist , cool style of the pedal and it’s decision to prioritize ease-of-use. One thing you can’t take away from it is that everything it offers is executed expertly, and it’s a great option for anybody just getting into looping thanks to its simplicity.

The problem for the Ditto Mic looper is that a lot of other loopers can do this stuff. The RC-202 and the bigger RC-505 from Boss come to mind, since they were designed with vocalists in mind, but even guitar-focused Jamman Stereo or the RC-30 have XLR jacks and can be used for vocal looping if that’s what you’re looking for. The Ditto Mic pulls off the basic looping features with elegance and style, but other pedals can do so much more if you really want to get into looping.

The upshot is that the Ditto Mic looper is a great pedal for what it is. It opens up the iconic simplicity and high-fidelity of the Ditto series to a larger group of musicians, and it executes everything just as well as you’d expect TC Electronic to do. It’s priced competitively, and if you’re just looking for something to practice with and have fun with, it’s a great looper that you should seriously consider. But if you want more from your looping experience and have a bit more money to spend, you should definitely think about sacrificing a little bit of simplicity in return for vast improvements in capability.

The TC Electronic Ditto Mic Looper Pedal Has Featured In The Following Guides...