Audio interfaces under $100 range from large 'rack' styled devices through to pocket sized incredibly compact and durable audio interfaces. Some come with full colour LED/LCD displays for input and output levels. Others offer portability by being powered by batteries.

Whether you're looking to record a keyboard, guitar or vocals. The best way to setup your recording station is to plug into your computer. Therefore making your tracks via an audio interface. Low and zero latency models are considered to be the best audio interface options on the market.

We constantly update this list with recommendations we consider the best audio interfaces under 100 dollars.

When you are recording you want to make sure you have the best possible sound. That is why you need an audio interface that provides the best quality sound. The PreSonus AudioBox USB 96 2x2 is an interface that allows you to record up to 96kHz/24-bit resolution and includes two combo input/output jacks and a zero-latency direct monitoring feature. The AudioBox is also USB 2.0 compatible, making it easy to connect to your computer. This device also allows for more recording options, as you are able to connect the interface to your computer and use it as a USB MIDI device.

It used to be that if you wanted to create high quality sound you had to spend a lot of money on a professional interface. However, that is no longer the case. Products such as PreSonus AudioBox USB 96 2x2 are revolutionizing the industry by providing high quality sound at an affordable price. This particular product is a USB audio interface that is powerful enough to record up to 96 kHz and 24-bit audio, which is perfect for professional studio quality recordings.

The PreSonus AudioBox USB 96 2x2 is built for recording quality audio without breaking the bank. It provides an inexpensive way to record high quality music on your PC or Mac. 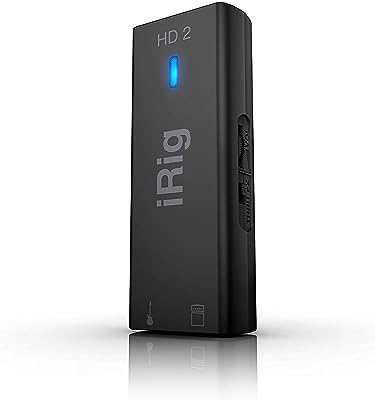 A high-quality interface for guitar, bass, and other instruments. It features a 24-bit/96kHz audio resolution, which provides the best sound quality possible.

The IK Multimedia iRig HD 2 is a high-quality audio interface that is compatible with iOS and Android devices. It has a plug and play setup process. It features a 24-bit/192kHz resolution, which means that you can record your music at the highest quality possible. It also has an ¼” instrument input, which is something that many other interfaces do not have. The IK Multimedia iRig HD 2 is perfect for musicians who are looking for an interface that will give them high-quality recordings at a reasonable price point.

The IK Multimedia iRig HD 2 offers a lot of features that make it great for guitarists. The interface provides guitarists with the ability to play their instruments without the need for any additional software. It also has a built-in tuner, which can be really helpful when you are tuning your guitar on stage or in the middle of practice. The interface also has a built-in mic preamp, which allows you to record vocals or acoustic instruments using the device’s own microphone, which is not always available on other interfaces. The iRig HD 2 is compatible with all iPhones ,iPads and Macs. 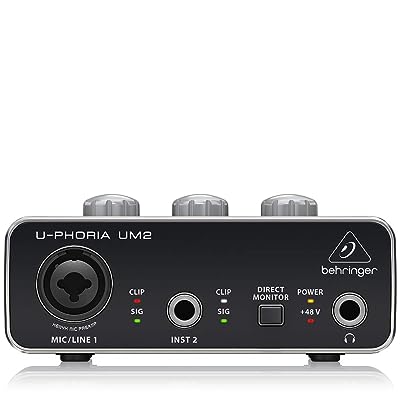 Don’t let its small size and extremely low price deter you from the fact that this audio interface is the real deal.

The U-PHORIA UM2 is a 2-in/2-out USB 2.0 audio interface with outstanding audio quality. The highly efficient 24-bit/96 kHz converters and the unique 'one knob' preamp gain make the U-PHORIA UM2 a true 'plug-and-play' solution for home studio recording. The interface is a 2-in/2-out USBdevice with a single microphone preamp. So you can record vocals or musical instruments directly to your computer. It's simple to use, you just plug in your instruments and start recording. No other gear or software is required. And since it's a direct digital connection, you get the best sound quality possible.

The integrations with your DAW are transparent. The U-Phoria UM2 is a smart, cost-effective way to improve the quality of your home studio output. The Behringer U-PHORIA UM2 is an audio interface that can be used with your PC and Mac. It features a XENYX preamp, USB 2.0 audio interface and 24-bit/96 kHz resolution. It offers a complete solution that gives you everything you need to easily make professional recordings of vocals, guitar, or any other audio source. 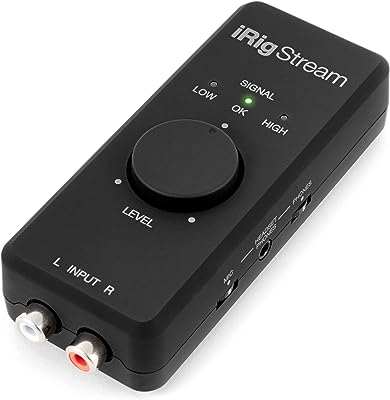 This is an audio interface that connects to your smartphone or computer via Mini DIN. It also features a headphone output for monitoring and an input for instruments. A lightweight, portable option.

IK Multimedia is a company that has been making music production gear for over 25 years. The company was founded in 1996. They are known for their IK Multimedia AmpliTube guitar amp and effects software.

The IK Multimedia iRig Stream is a great audio interface for mobile musicians. The iRig Stream has a RCA input for instruments or microphones. It also has two outputs, a simple headset jack and a mini din cable. Which can be used to send stereo audio to your computer. It's perfect for musicians who want to record or perform live on their phone or tablet.

The iRig Stream is designed for musicians who want capability without the compromise on size. This is a tiny interface that really can do a lot. It can be used to connect an iOS device or Mac computer to a mixing console, studio monitors, or headphones. 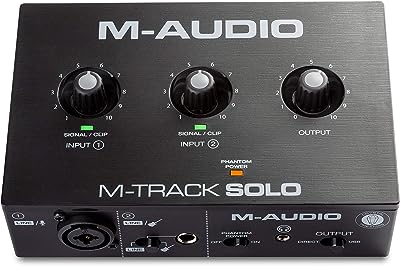 A recording interface made for musicians and producers. It is a compact and portable interface that has everything you need in order to record your music.

The M-Audio M-Track Solo is a great interface for beginners and professionals alike. It has a variety of inputs and outputs, so you can record anything from vocals to guitars.

The M-Audio M-Track Solo is a simple yet powerful audio interface for any musician who wants to record high-quality audio, without the hassle of complicated set-up. The recording interface is compatible with both Windows and Mac operating systems, and can be plugged into any computer with a USB connection. The device has two input channels with XLR/TRS combo jacks. This means that you can plug in two different microphones or instruments to the same device at the same time, which is perfect for recording songs or jam sessions with your bandmates. The M-Track Solo also comes equipped with an instrument input on its front panel for easy access.

This audio interface can be used with any DAW software, including GarageBand, Pro Tools, Logic Pro X, Cubase, Ableton Live and Reason. It is compatible with Windows 7 or later and Mac OS 10.8 or later operating systems. 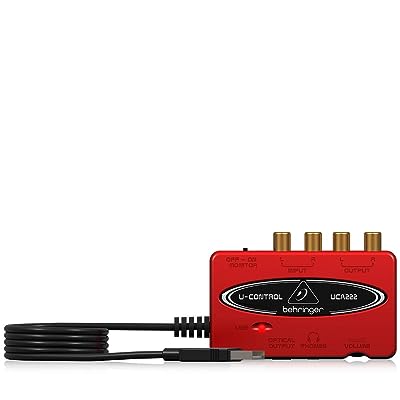 A budget audio interface which is great for both recording and listening to music.

The U-CONTROL UCA222 2-Channel Audio/MIDI Interface is the solution for connecting a professional quality microphone or musical instrument to your computer, mac or even iPad. You get 2 analog inputs and 2 analog outputs, each with a dedicated volume control. You can mix your audio from your iPad and the UCA222 with the UCA222's mixer, and even record it on your iPad with the UCA222's built-in microphone preamp.

If you're looking for a great audio interface interface for your next project, the Behringer U-Control UCA222 should definitely be at the top of your list. Not only does it have great sound quality, it also has a high quality build and a variety of inputs and outputs that will make it compatible with just about any piece of gear on the market. It's would be criminal to forget it's biggest asset. The small size of it. It's super portable and great when you're moving from location to location. A worthy consideration for anyone on the go.

More Information Regarding Audio Interfaces Under $100 (2023)

Audio interfaces under $100 come with all sorts of connection types allowing you to connect to your computer via USB, thunderbolt & firewire to name a few. USB is the most popular and widely used mainly because it comes in many different forms ranging from Type-A, 2.0, & Micro USB through to the latest Type-C connections. Thunderbolt connections are the fastest. You'll find these are used on some of the more modern and high end audio interfaces available on the market.

The price of top quality audio interfaces has fallen dramatically in recent years. This is great news if you're looking to get hold of a device that will give you a fantastic sound without costing the earth. This is because many brands have taken their previous generation audio interface models and repackaged them. Usually with some modern nuances to create a budget model of their current range. Don't be put off by this, these audio interfaces under $100 are still great value. They might not have all the latest bells and whistles but they get the job done. Which means you don't need to pay substantial amounts of money for them.

Depending on what you want to achieve, you'll priorities different features when finding the best audio interfaces under $100 for your situation. If space is an issue you'll look for a small to medium sized interface that provides you a great experience and end result while not taking up a large portion of your limited space. If you're in need of a portable audio interface then you'll probably rule out any rack mountable models. Instead you'll be looking for small battery powered options.