The Best Small Audio Interfaces On The Market (October 2021)

Small audio interfaces range from table top devices that can be carried in a backpack, through to pocket sized incredibly compact and durable audio interfaces. Some come with full colour LED/LCD displays for input and output levels, others offer portability by being powered by batteries.

Whether you're looking to record a keyboard, guitar or vocals, the best way to setup your recording station is to plug into your computer and make tracks via an audio interface. Low and zero latency models are considered to be the best audio interface options on the market. 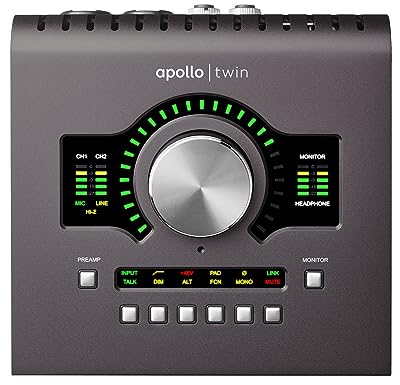 The Apollo Twin MKII Solo by Universal Audio can be accurately described as the creme-de-la-creme of audio interfaces when it comes to the quality of its components and its overall build. The unit provides 2 XLR/TRS combination inputs, an optical input, as well as 4 line outputs, making it decent for musicians who only need a few inputs for simultaneous recording.

Now, the main selling point of this audio interface lies in the unit’s internal circuitry and the connectivity type (being thunderbolt), which mean that it can provide sub-2ms round-trip latency, which is extremely low! The audio interface comes with a Universal Audio Plugin Bundle, which includes: Legacy versions of the LA-2A, 1176LN, Pultec EQP-1A, plus Softube Amp Room Essentials, Raw Distortion, 610-B Tube Preamp & EQ, and more

Additionally, the interface has some other useful features, such as a built-in talkback microphone, which is ideal for a professional studio environment.

The Apollo Twin is an EDM industry favorite. In fact, in a recent NGHTMRE Snapchat he can be seen using this great interface while teasing one of his newest releases. With a sturdy build and unique look, the Apollo Twin is also an excellent interface with the tone feel and flow of an analog controller. This interface differs from most of the others that we have covered as it requires a Thunderbolt connection to be used with your computer. If you’re looking for an industry leading interface for a professional sound, look no further than the Apollo Twin.

A scaled-down alternative to Universal Audio’s flagship Apollo 8 and 16, the original Apollo Twin has been giving ‘the rest of us’ access to those mythical Unison preamps, first-class I/O and swanky UAD plugins for three years now.

The new Apollo Twin MkII is essentially more of the same, but with a few minor improvements, and an optional DSP upgrade. Let’s start with what’s stayed the same.

The top panel centers on a satisfyingly oversized knob, controlling Monitor or Preamp input levels, as selected with the two buttons flanking it; and six Option buttons, contextualised by an LED icon strip, that again change function depending on whether the unit is in Monitor or Preamp mode. Input and output metering are provided by four five-segment LED ladders.

The back panel and front edge house two combi Mic/Line inputs. It also has a Hi-Z quarter-inch guitar input (overriding Mic/Line 1 when occupied), four quarter-inch output jacks (two Monitor, two Line). Not forgetting the stereo S/PDIF out, Headphones out and a TOSLINK port. This last port is for adding up to eight analogue inputs via ADAT.

Still a desktop-format 2-in/-6-out interface with 24-bit/192kHz capabilities, the Apollo Twin MkII would be almost indistinguishable from the original were it not now black rather than silver. It connects to your Mac or PC via Thunderbolt, but it has to be powered from the wall; and while the original Twin (still available) could be had in a USB 3 version, it’s not clear whether the MkII will follow suit.

Also a ‘DSP box’ for powering UAD plugin effects (VST/AU/AAX/RTAS), the Apollo Twin MkII features the same game-changing Unison preamps as its predecessor, fed by the Mic/Line and Hi-Z ins. These enable a gradually expanding subset of UA’s classic hardware emulation plugins to be inserted directly into each input path. Physically reconfiguring the preamp’s impedance and gain staging. As an alternative to the regular algorithmic modeling of valves, transistors, amps, EQ. This results in near-zero-latency monitoring and/or recording through them.

When we first reviewed the Twin, there were only three Unison plugins available – the UA 610-B (bundled), the UA 610-A and the API Vision. Since then, they’ve been joined by the Manley Voxbox, Neve 1073 and 88RS; eight guitar and bass amps by Ampeg, Fender and Marshall; and three distortion stompboxes, including the bundled Pro Co Rat emulation, Raw. All of them sound and feel great, and Unison remains a huge and unique selling point for the Apollo Twin MkII.

So, apart from the color change, what else is new? Well, UA has apparently beefed up the AD/DA converters, for even more dynamic range and less distortion, but the MkI was so outstanding in this department that you’ll be hard pushed to tell the difference – it’s still the cleanest, most transparent-sounding interface in its price range.

Other than that, the MkII sees a refinement of its studio workflow with the addition of a talkback mic and front panel access to a few of the monitoring functions of the Console software (see It’s not just the hardware).

The Talk button activates the talkback mic (the tiny hole below the knob), which can be sent to the outputs of your choice for control room communication or quick recording of notes and cues. The Dim button lowers the monitor output level, the Mute switch kills it entirely, and the Mono button switches between stereo and mono output for playback system compatibility checking. Very nice.

In Monitor mode, four of the Option buttons – which weren’t used at all by MkI – now come into play, necessitating the addition of a new row of icons to the LED strip, which has been made a bit deeper to accommodate them.

Apollo’s creed Apart from the Quad Core option, the Apollo Twin MkII is the very definition of an iterative upgrade. If you’re already a happy owner of MkI, the talkback mic and extra monitoring control alone aren’t reasons enough to reinvest. If, however, you’ve been hankering for more DSP than your existing Twin affords you, your day has come – have at it. And, of course, newcomers to the world of Apollo and UAD now get even more for their money, which can only be a good thing.

Given how much we loved the original Apollo Twin, it’ll come as no surprise that the MkII again wins our highest possible recommendation. Far more than possibly the best audio interface ever made. This is a musically empowering hardware/software hybrid. Capable of elevating even the humblest of home and project studios to genuinely professional-quality heights. 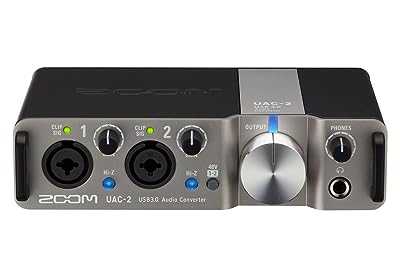 The Zoom UAC-2 is a state-of-the-art audio interface complete with USB 3.0.

Zoom's UAC-2 (Universal Audio Converter) is an easy-to-use USB audio interface that connects to your computer and instantly transforms it into a full-fledged recording studio. Built on a rock solid foundation of quality, flexibility and ease-of-use, the UAC-2 offers exceptional audio performance for both analog and digital audio. The Zoom UAC-2 is a digital recording interface designed for home-studio use. This two-input, two-output interface features two combo mic/instrument inputs with both XLR and 1/4" connectors. It also provides two TRS main outs, a headphone jack, and MIDI in/out jacks to connect to synths and other gear.

The Zoom UAC-2 is a 2-input, 2-output high-resolution audio interface that features built-in MIDI I/O. It connects to your Mac or PC via USB 2.0, providing two sets of high-impedance inputs, eight balanced outputs over XLR jacks, and a single MIDI In and Out. The UAC-2 is compatible with all major DAWs and provides ultra-high-quality 24-bit, 96 kHz audio that's ideal for recording, sound design, and other audio applications.

The Zoom UAC-2 lets you connect your instruments, microphones, and audio sources to your iPad or Mac computer and record studio-quality sound. It features two combo inputs with XLR/TRS combo jacks, one microphone preamp, and two Hi-Z instrument inputs. The UAC-2 record direct to iPad, iPhone, and Mac computers and is compatible with popular recording software such as GarageBand, Logic Pro, Pro Tools, and more.

If you are serious about making the highest quality recordings, the Zoom UAC-2 is the best tool for the job. This interface features superb quality preamps and is on offer at a great price. The interface is great for recording vocal and instrument tracks alike. 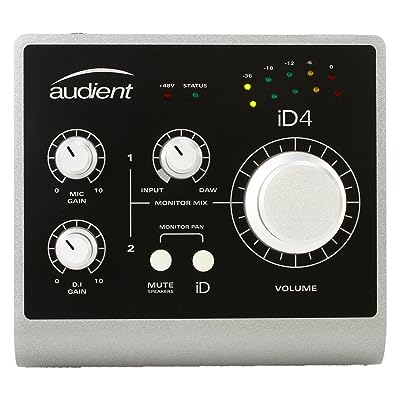 The iD4 is a serious upgrade for any personal project studio or mobile setup.

The Audient iD4 is a compact and powerful 2-in/ 4-out USB audio interface that is perfect for producers and musicians looking to create high quality recordings with their Mac or PC. With a combination of world-class analogue pre-amp circuitry and superb conversion. It provides a professional and reliable audio interface. The interface is designed to provide professional audio studios with the connectivity they need in a single unit. The iD4 is a brand new product to the Audient range, it is a simple 2 channel interface that uses an extremely reliable and proven audio engine.

At the heart of the iD4 is an advanced FPGA processor called the Hammer, which is capable of processing audio at sample rates of up to 192kHz. The Hammer allows this interface to operate at very low levels of latency, and is also used to process the device's digital outputs and its built-in headphone amplifier. Weighing in at less than 2kg the iD4 features a single mic preamp and 4 analogue channels of I/O on standard TRS jacks. By using a USB connection to your computer, the iD4 can have up to 7 analogue channels of I/O. It also has MIDI I/O and a hardware monitoring path to your DAW. The iD4 records from an unlimited number of digital sources via ADAT optical or SPDIF. The optical and SPDIF inputs can be routed to any of the analogue channels for monitoring.

The iD4 is the most affordable interface in Audient's range, and yet the company has squeezed some incredibly impressive technology into its compact body. It is a 2-channel high-end audio interface featuring Audient's award-winning preamps and AD/DA conversion. Suitable for home recording and project studios, the iD4 features portability.

Small audio interfaces come with all sorts of connection types allowing you to connect to your computer via USB, thunderbolt & firewire to name a few. USB is the most popular and widely used mainly because it comes in many different forms ranging from Type-A, 2.0, & Micro USB through to the latest Type-C connections. Thunderbolt connections are the fastest. You'll find these are used on some of the more modern and high end audio interfaces available on the market.

The price of top quality audio interfaces has fallen dramatically in recent years. This is great news if you're looking to get hold of a device that will give you a fantastic sound without costing the earth. This is because many brands have taken their previous generation audio interface models and repackaged them. Usually with some modern nuances to create a budget model of their current range. Don't be put off by this, these small audio interfaces are still great value. They might not have all the latest bells and whistles but they get the job done. Which means you don't need to pay substantial amounts of money for one.

Depending on what you want to achieve, you'll priorities different features when finding the best small audio interfaces for your situation. If space is an issue you'll look for a small to medium sized interface that provides you a great experience and end result while not taking up a large portion of your limited space. If you're in need of a portable audio interface then you'll probably rule out any rack mountable models. Instead you'll be looking for small battery powered usb audio interface.