The Best Firewire Audio Interfaces On The Market - 2021

Firewire audio interfaces range from large 'rack' styled devices through to pocket sized incredibly compact and durable audio interfaces. Some come with full colour LED/LCD displays for input and output levels, others offer portability by being powered by batteries.

Whether you're looking to record a keyboard, guitar or vocals, the best way to setup your recording station is to plug into your computer and make tracks via an audio interface. Low and zero latency models are considered to be the best firewire audio interface options on the market.

What Is A Firewire Audio Interface?

Choosing a firewire audio interface is great however not all firewire connections are built the same way. Firewire 400 & firewire 800 formats exist. If you're computer has firewire 800 ports then you have double the bandwidth than those with firewire 400 ports. So firewire 800 sounds like a no brainer right? Not exactly, it's very rare that you'd need this enormous increase in bandwidth. If you're using your audio interface in a home studio with 2-10 input/outputs then the reality is that any and all firewire formats will be good enough for you needs. If you're using 56 channels of 24-bit/192Khz audio simultaneously then we do recommend you push for a firewire 800 compatible model.

The price of top quality audio interfaces has fallen dramatically in recent years. This is great news if you're looking to get hold of a device that will give you a fantastic sound without costing the earth. This is because many brands have taken their previous generation audio interface models and repackaged them. Usually with some modern nuances to create a budget model of their current range. Don't be put off by this, these audio interfaces are still great value. They might not have all the latest bells and whistles but they get the job done. Which means you don't need to pay substantial amounts of money for them.

Depending on what you want to achieve, you'll priorities different features when finding the best firewire audio interfaces for your situation. If space is an issue you'll look for a small to medium sized interface that provides you a great experience and end result while not taking up a large portion of your limited space. If you're in need of a portable audio interface then you'll probably rule out any rack mountable models. Instead you'll be looking for small battery powered options.

What is an Audio Interface?

Overall we think firewire is a great choice and offers a significant speed boost when compared with most USB models. We've collected a list of the best firewire audio interfaces on the market to help you find the right one for you. 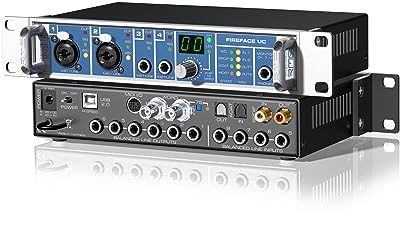 The RME Fireface UCX is a professional level soundcard for the studio.

This interface boasts excellent parameters, many inputs and outputs (8 in/8 out) and also the ability to connect via USB and FireWire.

But the main thing about the Fireface UCX is the clean untainted sound and stable performance. The included Total Mix FX software, although it looks slightly outdated, has some impressive functionality.

This interface, largely due to its impressively stable handling, is excellent for capturing performances of all kinds. With the abundance of inputs and output it’s suitable for recording drum kits and large ensembles.

That said, for the average home studio, its capabilities are probably overkill. Most home recording does not involve drum tracking. This is generally reserved for bigger studios, hence the price of the Fireface UCX.

The Fireface UC is ostensibly the same as RME’s Fireface 400, providing 36 channels of analogue and digital I/O with only the interface format changed from FireWire to USB.

The analogue inputs are split across the unit with two mic/line and two instrument/line sockets at the front and the remaining four at the rear on balanced TRS sockets.

Six of the analogue outputs appear as TRS sockets, which can be used for feeding a 5.1 surround system, while at the front is a single TRS socket for either headphone monitoring or an unbalanced stereo monitor path.

There is a single knob and two-digit LED display on the front of the unit that enables control of all output levels (analogue and digital) as well as the four front input gains. The driver interface has a dedicated page for control of the analogue I/O with gain faders, pad switches, phantom power for the mic inputs and impedance switching for the instrument/line inputs.

Also on this page are settings for the overall gain structure of the analogue inputs, TRS outputs and headphone outputs. There are three ranges: 10dBV (unbalanced), +4dBu (balanced) and a Hi Gain (outputs) or Lo Gain (inputs) which offers more headroom for those who work with high-gain level balanced outboard. This is a unique function that really enhances the interconnection flexibility of the unit.

We know many engineers who spend countless hours (which equates to lost revenue) trying to iron out compatibility issues with their interfaces. If one was to add up the cost of these lost hours, the price difference between the Fireface UC and an alternative (cheaper) product disappears and in fact reverses.

We would heartily recommend this unit to anyone looking to buy a non-FireWire interface.

This is one of the most reliable and fully featured interfaces on the market.

This is one of the most reliable and fully featured interfaces on the market. It runs on good old USB so there’s no trouble running it on MacOS. It’s quite striking how Steinberg has reflected the look of the UFX II in the AXR4. The Fireface UFX has 60 channels of audio! Digitally controlled high-end preamps, reference class converters and full 192 kHz operation.

The Fireface UFX II has 30 ins and 30 outs with 4 digitally controlled mic preamps on the front, another 8 analog on the back and the rest in ADAT, AES/EBU and S/PDIF digital. The latency and performance of RME’s USB technology are second to none and supports audio resolutions up to 192kHz. Along with the excellent monitoring screen, MIDI I/O and wordclock features, you can also plug in a USB stick in the front and record directly to it. Imagine taking an instant mix from a recording session or live show. The internal TotalMix FX software gives full routing access and hardware mixing with DSP effects.