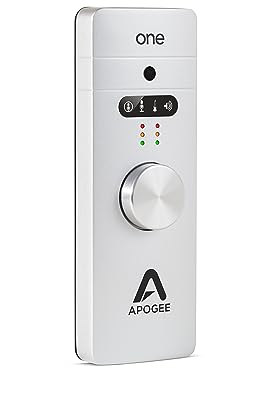 Make no mistake, this audio interface is fantastic.
Buy From Amazon.com

There’s not too much to say here, besides from the fact that Apogee create really high sound quality audio interfaces. However, from the research done, where Apogee lack, is in their customer service. Which isn’t necessarily something you want. Considering you may have questions regarding the interface if things were not to work! On a more positive note, Apogee has a great website, with plenty of information, and video tutorials on how to set up the device and even recording tips & tricks.

Apogee One for Mac is essentially the same interface as the previous generation’s Apogee One. This newest version has a silver design (which, admittedly, looks pretty sleek) and eschews the iOS connection cables to save the purchaser $100. The converters are the same, the features are the same, and physically it sports the same dimensions.

If you’re not aware of the Apogee One concept, allow me to enlighten you. It’s an incredibly compact audio interface that sports an XLR input. it also sports a 1/4” input tuned for instrument level sources. The XLR input can push out phantom power as needed, and you can utilize both inputs at once. These 2 inputs are accessible via breakout cable, cutting down on the clutter when you’re not using them as you can stow the cable elsewhere.

The Apogee One for iPad, iPhone and Mac is the best portable DAC and headphone amp I’ve tested. By portable, I mean one that plugs into an iOS device and needs no external power to play. It’s the best because it has the most and cleanest output, it’s the best made (all metal), and it has the best ergonomics: a big volume knob right where you need it.

The One comes at a bit of a premium compared to other 2-channel audio interfaces, and it’s pretty clear why. The products finish is stellar, and the dynamic range for the microphone input is far beyond your standard 2-channel interface’s level of excellence. The XLR input on the One is incredibly clean. It has plenty of headroom, and sounds a lot better than it should.

The Apogee One is quite possibly the best interface for the price you pay. Since most interfaces at that price range are almost all the same. The Apogee One stands out for its professional finish and the fact that is has an outstanding microphone.

Forget about everything you know about internal mics. This microphone has amazing frequency response and clarity even for vocals. The Apogee website has demonstrations of all the different applications of the ONE with the internal mic. The end product will surprise you.

Not only does it sound fantastic; it’s super easy to use. Plug it in, and the big knob controls volume in 1 decibel clicks over a wide range. I have no idea why consumer gear makes it so hard to control levels; this piece of gear does it right with a big knob. This metal beauty is well padded and isn’t going to slide around your desk. It’s the perfect combination of sturdiness and lightweight. It’s a solid bar of precision, and the volume control is a dream to spin.

Should you change your mind after owning the One and wish that you purchased iOS/Mac edition, don’t worry—Apogee will sell you an iOS interface kit for $99. The interface itself is not limited or hobbled in any way, it’s exactly the same as the One for iOS/Mac, just minus the cables. It’s nice to know the option is there should you want to exercise it down the road.