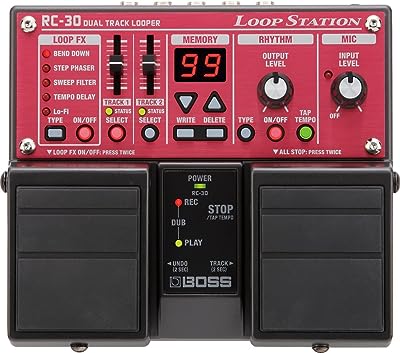 The Boss VE-30 will fix your pitch, subtly or drastically, it’s entirely up to you , depending on your needs. It’s very simple to use and just like the Mic Mechanic, you switch it on with a simple and swift stamp. Pitch-correcting is a popular feature of this pedal however it also has the ability to create harmonies, add reverb and even loop on command. The more creative you are the more you’ll appreciate the customization of this machine.

The BOSS VE 30 Vocal Performer isn’t primarily a vocal pitch correction pedal, it’s actually an All-in-One vocal effects processor solution, and being designed and produced by Boss, you know it’s high quality. Weighing 1.6kg it’s not the lightest pedal in the world, but it more than makes up for it in its ability to add layers of vocal harmonies, whilst adding creative vocal effects such as radio effect, distortion and strobe effect.

It allows artists to also use real-time pitch-correction, something that is highly important, to make sure the vocal harmonies are in tune with the lead vocal. Also allowing 38 seconds (mono) of looped recording, which is useful for singer-songwriters looking for a creative, innovative way to build up their song’s live instrumentation, layer by later, directly in front of their crowd.

The pedal also includes Phantom Power, so it is able to power condenser microphones, such as the Rode NT2A.

Boss VE-30 Vocal Performer is a great option for musicians who not only sing but plays musical instruments as well. It’s a vocal effect processor pedal that’s easy to use and suits all amateur and beginners musicians.

This foot pedal is high-quality and is sturdy and well-built. The two big effects processor pedals make it user-friendly and you won’t have to worry about missing the vocal effect processor pedal with your foot. We really like the red color, it looks really cool.

This vocal processor features double-tracking, harmonies and pitch correction. There is a lot of things you can use it for, and it’s very versatile. Reverb? Not an issue ? Loop station? It’s all included!

This is the perfect vocal effects processor for the musician who finds himself reading through these reviews thinking ‘How on earth am I ever going to make a decision?’. This vocal effect processor pedal works well for everything and works for most musicians!

The Boss VE-30 Has Featured In The Following Guides...