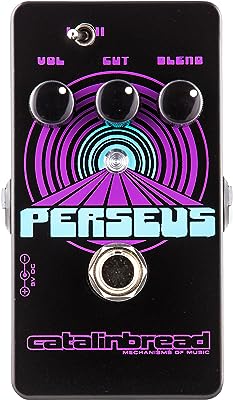 The Catalinbread Perseus sub-octave fuzz guitar effects pedal is so massive and thundering, you’ll regret turning it off. Called Perseus due to the lowest note in the universe coming from the Perseus cluster.
Buy From Amazon.com

The Perseus features three knobs and an octave switch. While the controls on the Perseus may seem simple, it’s important to know that your guitar’s tone, volume and pickup selection makes a big difference in the Perseus’ behavior.

Some words from the lead designer of the Perseus pedal.

“I’ve always liked the idea of analog octave down pedals. But most of them don’t track well on the low strings and some of them don’t have enough output or any control over the output volume at all. Of course, with the new offerings in the digital realm, we now have pedals that will track perfectly and even polyphonically to boot! The digital pedals are way cool, but I was still hankering for somethiing funky, greasy, fuzzy. ..unpredictable, if I want it to be. So I got out the breadboard and started working.”

Oh, and why is this pedal called Perseus?

“The lowest note in the universe is coming from a black hole in the Perseus Cluster, about two hundred fifty million light yeras away. What’s happening out there is that intergalactic gas has concentrated around a cluster of galazies, forming a cloud. A massive black hole is sending out jets of particles that crash into the cloud, causing pressure waves to ripple outward. Some astronomers interpret these as sound waves. of course, even if you call it sound, it’s too low for anyone to hear. They estimate the note to be a ‘B flat’, about fifty-seven octaves lower than middle C.”

“Ok, no, the Perseus won’t give you 57 octaves below middle C, but it will give you a measly one or two octaves!”

Overall, if you play lead, this is a great pedal with a very unique sound. It’s durable, well made, and with its own noise gate system inside, it’s as quiet as a mouse until you come to play something. For something other than your usual ‘octave up’ pedal, give the Perseus a try.