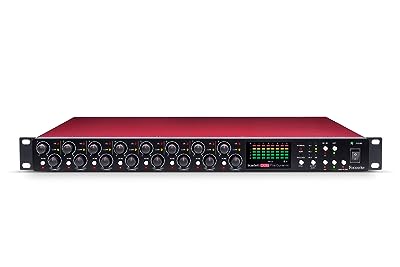 Expand your setup with eight mic/line inputs, eight line outputs, Focusrite precision conversion up to 192 kHz AD/DA and analogue compression on every channel. The OctoPre Dynamic builds on the features of the OctoPre, adding analogue compression to all input channels and eight channels of precision D-A conversion. With dual ADAT* optical I/O, it’s ideal for expanding a 18i8 or 18i20 – or any interface with ADAT I/O. Scarlett OctoPre Dynamic is ideal for expanding any effective, multi-channel recording system. With its high-headroom mic, line and dual instrument inputs and analogue compression, it’s ideal for tracking drums as well guitars, keyboards, vocals and more. Meanwhile the eight outputs give you the option of expanding your analogue outputs over and above the OctoPre.

When you buy an audio interface, a bunch of I/O options usually go ignored. WordClock, ADAT and SPDIF are present on most interfaces, but are rarely ever used. However, by making use of these connections, you can vastly enhance your interface’s potential, expanding from perhaps only a stereo input to sufficient inputs for a whole multi-tracked drum recording. The Focusrite Scarlett OctoPre Dynamic provides an extra eight analogue inputs, each with its own mic preamp and compressor, to any ADAT-equipped interface.

With eight channels of Focusrite’s 2nd generation preamps and built-in precision 24-bit / 192 kHz conversion, the OctoPres present an ideal way of adding eight extra mic/line inputs to a DAW or digital console. And there are eight analogue line outputs too, perfect for stand alone use in a live sound environment.

For the bass guitar, we used one of the two instrument inputs on the OctoPre Dynamic, and were again very impressed with the clarity of the signal. On both the bass and the lead vocal, we tried dialing in a healthy dose of compression with More mode engaged. The single-knob compressor control acts as both a threshold and make-up gain in one as you turn the dial, so you don’t lose level as you turn it up. This makes it very quick and easy to dial up a sound and move on to the next track, but also a little tempting to overuse the compression. On the bass, this pulled the attack back a little, but did smooth out the performance nicely and made each note prominent in the mix, while on vocal, the compressor simply demanded to be turned up.

The Scarlett OctoPre Dynamic made for a really great tool. With that and the Red 8Pre, we had a 16-channel recording console in a 2U rack, eight of which included compression. And since it’s over Thunderbolt, you shouldn’t have any issues recording that many channels simultaneously, either. The lack of filters isn’t a big deal, but it would definitely be interesting to see if the slightly better-spec’d Clarett OctoPre also gains a Dynamic version for users who would like to use the Air mode as well.