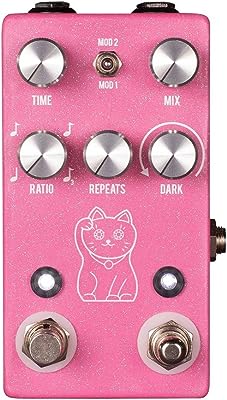 Anyone who follows JHS pedals will be familiar with the original Pink Panther Delay. Loved by guitarists for its hypnotising textures and crisp, detailed tones, the success and availability of the Pink Panther was unfortunately short lived after the chipset used in it became obsolete. Only a hundred models were produced before it was discontinued. Nearly 10 years after the original model was released, JHS announced a reissue of their coveted and seemingly forgotten pedal. So here we are.

The JHS Pedals Pink Panther is back! This unabashed digital delay draws its roots from our very first delay pedal, way back in 2007-2008. Staying true to our goal of bringing you a highly versatile, simple, and unique line of delay pedals, JHS outfitted the Pink Panther with a Tape Delay setting, tap tempo, modulation, and enough control to make it your go-to delay pedal on any gig. When it comes to the JHS Pink Panther, the saying, 'What’s old is new again' seems fitting. But then again, the Pink Panther never really gets old.

There’s an ambient beauty in the pristine repeats of a digital delay pedal that just can’t be found anywhere else. Likewise, there is pure magic in the tone of a vintage tape delay. JHS see no reason to make you choose between the two. The Pink Panther Delay’s side-mounted Digital/Tape switch takes you from crystal-clear washes to saturated and compressed goodness.

Whether you lean on the Pink Panther for its digital or its tape-like voice, JHS put enough tonal shaping on board to ensure you find your sound. A simple turn of the Dark knob removes highs from the repeats, helping your original tone stay on top of the mix. And with two modulation voices available, ’80s shimmer and old tape warble are just a flick of a switch away.

"The original Pink Panther was one of the early JHS pedals in our line and was the first JHS delay pedal dating back to 2007-2008. The new Pink Panther is now the continuation of our delay line, and it embraces our goal to bring you a highly versatile, simple and unique line of delay pedals.

The original 2007-2008 era rare/original units sell used for upwards of $500, so we thought it was time to go back to the drawing board to bring you what we consider the ultimate JHS reissue nearly ten years later. While the Panther Delay (large box, silver) and Panther Cub V1.5 (smaller box, teal) offer up authentic and genuine bucket brigade analog goodness, the Pink Panther takes a different approach: unashamed digital processing.

Some of our favorite delay pedals ever made are early digital delays like the Boss DD-5, Ibanez DE7, DDL and the DOD DFX9. We think that the Pink Panther tips its hat to those units that replicate, effect and mold your guitar tone into something that only digital delay can.

With a small footprint, loads of features and a simplistic user experience, we believe the Pink Panther is the diamond heist you have been looking for!"

The JHS Pink Panther Delay Pedal Has Featured In The Following Guides...