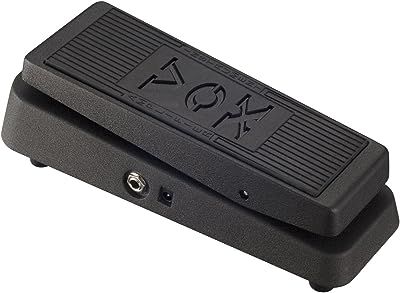 Based on the specifications of the original pedal developed by VOX in the '60s, the V845 Wah-Wah offers guitarists the same legendary tone in a new sturdy but very affordable design. An AC power connector is fitted to save on batteries and the outer case is coated with tough all-black finish making it the perfect choice for your pedal board.

VOX developed the world's first Wah-Wah effect during the '60s in an effort to allow guitarists to emulate the sound of a trumpet being muted -- an important musical ingredient of the day. VOX's original Wah-Wah pedal quickly gained widespread popularity and its unique sonic characteristics have encouraged further experimentation by guitarists ever since. Having made spotlight appearances on some of the most famous recordings of all time, the Wah-Wah is still considered 'must-have equipment' for guitar players of all levels and abilities today.

The massive success achieved by VOX in the 1960s laid the foundation for the legacy that continues to thrive nearly 60 years later. The sound of VOX amplifiers has left a lasting impact on popular music that still reverberates today. The most influential artists in the world continue to rely on VOX amplifiers to deliver world-class tone in the finest studios and on the biggest stages around the globe. Find your voice with VOX.

Overall we really like the sweet sound this pedal produces. You can really feel the attention and care that's gone into recreating that 60's classic sound. One word of warning though, the battery is quite difficult to get to, you need to take the entire bottom over off via the 4 screws hidden in the rubber feet. We recommend avoiding all this by powering the pedal with a AC adapter instead.

The VOX V845 Classic Has Featured In The Following Guides...