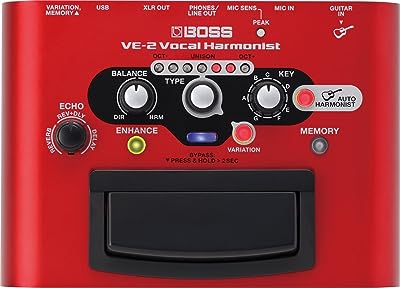 The likes of DigiTech and TC Helicon have professional vocal processors that are aimed at singer/guitarists, and now Boss has got in on the act with the new VE-2, which can take an input from your electric guitar to control your harmonies – something that wasn’t available with its previous VE-20 and VE-5 models. Now, Boss is a company that needs no introductions when it comes to vocal harmonizer pedals, vocal effects pedals or general music equipment. They’re famous for creating high-quality music equipment, which are designed and built to last for a lifetime.

Although Boss is under pressure by brands like TC Helicon when it comes to harmonizers, they are still holding their ground. Boss VE-2 is a cost-effective, simple, but also one of the most agile vocal harmonizer pedals out there. Let’s take an in depth look and see what it’s really made of.

The VE-2 offers 12 different harmony types to add to your own voice, each featuring one or two voices above and/or below it, plus a switchable variation option with more voices for richer harmonies. The pedal also comes with several vocal improvments such as delay, reverb and compression with or without frequency correction. We personally think that the Boss ve-2 sounds fantastic, particularly if you use it subtly, lowering the balance knob settings, so that it accompanies the main vocal, but doesn’t drown it out.

Right from the start, it’s perfectly clear the VE-2 is a vocal harmonizer pedal and not much more. Boss has other models which are far more dynamic and multi functional, but this one was designed to deliver the core of this effect. Even so, they did include basic reverb and delay effects. You can’t modify them too much, nor are there many types to select from. You can simply select either one, or mix the two of them. That being said, the quality of the pedals build is on that standard, somewhat expected Boss level.

The Boss VE-2 also has an interesting function, called ‘Auto Harmonist’… This is fantastic for singers who want to connect an instrument to the VE-2 such as a guitar, as the unit senses and detects the chord progressions used, to work out the musical key that the vocals should follow… Absolutely fantastic if you have key changes in the song, as this unit is able to listen to the change in chords (mid-song) and then adapt the harmonies accordingly.

For all the troubles of navigating the crowded control interface, your reward is a very solid core performance. We are talking pretty organic tone even when you go crazy with harmony modes. Built in delay and reverb are okay, but nothing to write home about. With that said, they won’t stand out as artificial if used lightly. When it comes to tracking, things are great.

The unit’s ‘Enhance’ component gives the singers immediate access to dynamic and subtle frequency correction at a touch of a button. The button specifically adds compression and analyses the vocal tone to automatically filter certain frequencies and boost others, helping to give a more refined, studio-quality sound.

The vocal harmonizer pedal has little trouble following you through complex chord progressions. Dropping it into hybrid mode yields some fairly interesting results. Depending on your settings, having that manually set key can help a lot. What matters the absolute most is that the vocal pedal tracks perfectly fine even in this mode. In essence, Boss VE-2 is everything it claims to be. Nothing more and nothing less. That is something we can appreciate.

Overall, we really like the Boss VE-2 unit. As we mentioned, not only does it provide a simple to understand interface with easy-to-use controls, but its delay, harmony and reverb effects actually sound pretty good. At the end of the day, Boss VE-2 represents a fairly affordable alternative to more complex designs out there. It’s simple, offers rock solid performance as well as reliability. We’d love to see a better organized control panel, but that is not too big of a deal all things considered.

Not only does the unit sound good, but it provides a good amount of variety for singers to play around with and find their favourite sounding tones and configuration combinations, which can be saved and referenced instantly simply by utilising the unit’s 3 preset memory banks. As far as who the VE-2 is ideal for, Boss have made a great decision in not only providing interface controls to control the musical key settings, but also in providing the auto harmony function for singer/songwriters who want to plug in their instruments instead.

The Boss VE-2 Vocal Harmonist Vocal Stompbox Has Featured In The Following Guides...