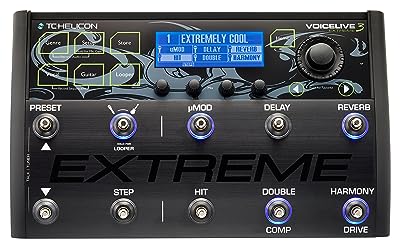 Many companies have a kind of tiered approach to their pedals. Boss does not just offer the RC-300, for example, they put out the RC-3 and RC-30 too, which package basically the same core features into different-sized units, with some of the capability shaved off as you get smaller and smaller. It ain’t easy being a singing guitar player, but TC-Helicon’s new VoiceLive 3 aims to make your switching and effects easy by combining vocal and guitar processors, as well as a looper, into one ingenious package.

It may seem like I have a thing for TC Helicon, but trust me – when searching for the best vocal harmonizer pedals, you’ll be stumbling across many of their products. This Canadian company devoted itself to making professional, high quality vocal processors. There are many ways you can use the unit, thanks to the wealth of connections on its rear panel, but your basic guitar/ mic setup sends vocals via an XLR output to a PA, and guitar signal from a jack output to your amp – the signals are kept separate, so you won’t get vocal harmonies blaring through your guitar rig.

At first glance, the VoiceLive 3 Extreme looks like the original VoiceLive but with a slightly cooler makeover. The soft silver of the standard edition has been replaced by a solid black, and the upper portion has a kind tattoo-like decal in the background. The Extreme version offers more than these purely cosmetic changes – which are genuinely pretty good – but you’d be forgiven for thinking it’s just more of the same.

The VoiceLive 3 operates using presets – there are 250 factory patches, with plenty more slots to store your own edits, but you can switch effects in and out within a preset. Two footswitches scroll up and down through the presets list, but you also get an extremely useful Step footswitch, which lets you step through different seems in order – the idea being you can store different sounds within one preset for different song sections. With plenty of built-in options and great-sounding effects, this is the most advanced pedal on the list, but it comes at a significant increase in price, as well as complexity.

The effects are high quality, and the harmonies track your voice well – assuming you can sing in tune in the first place. Harmonies can be set to a fixed scale but – and here’s the good bit – they can also be set to automatically change with your guitar chords. The classy-sounding guitar effects are derived from sister company TC Electronic’s TonePrint pedals, and there’s a complete pedalboard’s worth that can be switched individually or collectively. You also get amp simulation in the signal chain, featuring a range of amps.

The TC Helicon VoiceLive 3 Extreme Has Featured In The Following Guides...