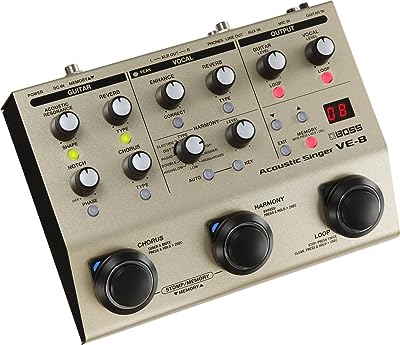 More than just a vocal effects pedal, infact the Boss VE-8 Acoustic Singer is an all-in-one effects and preamp provider for acoustic guitars and vocals. It’s not a secret that Boss has a strong reputation when discussing and comparing guitar effects pedals. Their VE-8 Acoustic Singer is certainly a contender for most versatile harmonizers on the market at this moment. If you’re in the market for a pedal that’s a bit more complex than the usual stuff, this vocal harmonizer pedal should have your full attention.

It starts off with dedicated preamps for instrument and mic, both of which come with completely independent effects, of which the microphone side component stands out due to it’s myriad of features. This includes fundamental effects like smart harmony and reverb, while also including developmental effects such as distortion, robot and more electronic effect types.

When Boss set out to make VE-8, they didn’t just want to build a solid vocal harmonizer. They went a bit further than that. VE-8 features a wide double stack body that brings a lot of that classic Boss reliability. It’s rock solid and inspires enough confidence to be used on just about any stage out there.

The top panel is where all the major controls can be found, and they are not short on numbers. Boss VE-8 packs a very impressive vocal harmonizer effect along with a looper and a chorus. Additionally there is a reverb available for both the guitar channel and vocals channel. In terms of I/O options, you’re given the standard microphone and instrument lines with optional Phantom Power, not forgetting stereo modes. Boss included a USB port, allowing users to connect VE-8 to a laptop/computer. Controls might seem confusing, but after a little while, they become very intuitive. The control interface is split into four areas. At the top, you have the instrument cluster, vocals cluster, and standard output section. In the lower area of the pedal you’ll find the foot switches. Depending on how you press them, these switches will initiate memory mode, or activate the on board tuner.

While focusing on the guitar element of the pedal we find it’s just as packed, with built in effects, such as delay and an interesting acoustic resonance that enhances the sound of piezo equipped acoustic-electric guitars. It’s an amazing all-in-one vocal harmonizer pedal, and it’s recommended for both traditional and adventurous singer-guitarists.

When it comes to ‘End Product’ , Boss VE-8 is a real powerhouse. What is most interesting is the quality of the available effects. Often times when you get a ‘jack of all trades’ type pedal like this one, it is usually strong in some areas, but mediocre in others. VE-8 doesn’t have that issue. On the contrary, the sound is very natural, especially when used as intended with acoustic instruments. Having 50 different Memory slots also helps a lot. You can basically dial in a setting you want, save it, and pull it out of the library later on.

While it gets most of the thumbs up from its quality mic harmonies and reverb, it also impressed many of guitarists. There are a few who were not satisfied with some of the extra effects, but still loved the Boss VE-8 overall. Boss VE-8 pretty much nails what every acoustic guitarist needs while up on stage. The features alone make this a great tool to have available in any studio or on any stage . To summarize, it’s one of the best vocal harmonizer all-in-one pedals you can get on the market today.

The Boss VE-8 Acoustic Singer Has Featured In The Following Guides...