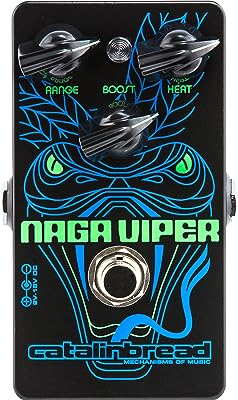 The Naga Viper is a booster that lives in the grand old tradition of the Dallas Rangemaster 'Treble-Booster'. The original Rangemaster has been used by many influential British guitarists including Tony Iommi, Brian May, Marc Bolan, and KK Downing and Glen Tipton of Judas Priest. These guitarists, while completely unique in their styles, share the Rangemaster as the secret of boosting their cranked British tube amps into a juicy, harmonic-laden rock sound that always cuts through the mix and is ultimately proto-metal.

The Naga Viper is hommage to this famous circuit. Beyond its basic tuning, the Naga enhances the classic circuit with the addition of two extra controls - Range and Heat. The original Rangemaster had just one control - Boost which everybody dimed anyway but essentially controlled the output volume. Our RANGE knob is a continuous control which allows you to go from classic treble-boost to a full-range boost and anywhere in-between - as the original could only function as a set frequency 'treble-booster'. The HEAT knob gives you control over the gain level saturation, unlike the original which was fixed at maximum gain.

Catalinbread took this topology from an attempted Field Goal back to other endzone for the game-winning kick-six TD.

This control sets the frequency response of the Naga Viper. For the classic treble-booster response, turn this control full CW. If you are playing into a cranked British style tube amp, you'll get those famous sounds! If you find you could use some more fulness, turn the Range knob back until you get what you're after. This knob is particularly useful for dialing in a thinner sounding single coil guitar or if you are boosting a Fender style amp or an overdrive pedal such as the DLS MkII or CB30. The way the Range control works is it sets the lowest bass frequency that gets through. The 'treble' frequencies are always being boosted.

This control sets the output level of the Naga Viper. For overdriving amps or overdrive pedals, you'll normally want to set this control fairly high. You'll notice that as you turn this control you'll hear a slight whooshing or crackle type sound - this is normal and is due to the traditional Rangemaster circuit used for the Boost control.

Overall, this works very well with other fuzz and boosts The variable tone and boost knobs make the it far more flexible than the original Rangemaster. It is relatively quiet too. If you want that classic Treble Boosted Vox sound, this is a good choice. Check it out today!

The Catalinbread Naga Viper Booster Pedal Has Featured In The Following Guides...