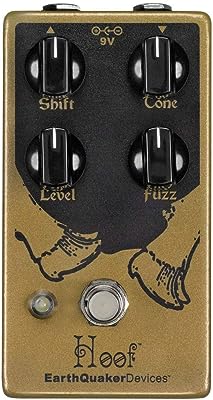 If you are a guitarist or a bass player you know that there are a lot of effects out there. This is great news for you because you have an abundance of choice when it comes to effects pedals. The problem is that a lot of these guitar effects are not very good quality. They are cheaply made, fall apart after a few months, and don't really do the job they are supposed to do.

EarthQuaker Devices Hoof V2 is designed for the guitarist who wants to create a fuzz sound that has a lot of sustain and bite to it. Most distortion pedals sound great for a few seconds but then they just start to sound like a buzzsaw. Hoof V2 is designed to keep the original tone of your guitar intact while giving you all the sustain and bite you can handle. This is done by using a high-quality germanium transistor which is combined with a unique clipping circuit that allows you to dial in the exact sound you are looking for.

The Hoof V2 is like no other. It is made by EarthQuaker Devices, a company that has released several fantastic guitar effects pedals that are known for their high quality. The Hoof V2 is a unique device that can be used in several different ways to achieve different sounds. It can be used as a fuzz, a boost, or even a distortion pedal.

More Consistent Than The Original

The EarthQuaker Devices Hoof V2 Has Featured In The Following Guides...