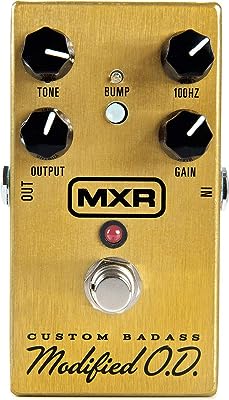 For added flexibility, we’ve added a 100HZ cut and boost control that allows for a more focused EQ when cut, or a beefier tone when boosted. The Bump switch engages an alternate EQ voicing that boosts the lows and mids. Put it in front of the ’78 Custom Badass Distortion for a slew of amp-like gain structures that won’t mask your tone.

The Custom Badass Modified O.D. is brilliant for boosting solos with over the top saturation for fluid lead tones as well. It’s possible to pull out almost endless sustain, verging into singing feedback. The 100Hz control is fantastic for fattening up the tone if desired. The MXR Custom Badass Modified Overdrive works great with slightly overdriving a clean amp, or sending an overdriven amp over the edge! Check it out today!