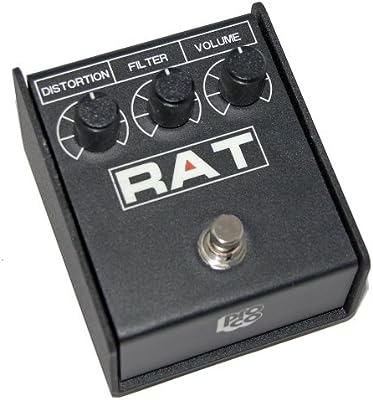 The RAT2 will be your go-to distortion pedal for every gig, whether it’s rock, blues, punk, or jazz.  This is the standard that all other distortion devices are measured against.  Heard on thousands of recordings, it has helped define the sound of the past three decade’s most influential bands.

The beauty of the RAT2 lies in its versatility.  Used as a primary distortion, it excels at arena rock rhythm tones and soaring leads.  Do you have a powerful amp with too much headroom for the gig?  Let the RAT2 be your dirty channel.  Maybe you already love your amp’s distortion.  Use the RAT2 as a boost for solos and get the extra kick you need.

The RAT2 features the legendary RAT filter control.  Turn it to the right to roll off brittle high-end frequencies.  Having trouble cutting through the mix?  Turn it to the left and allow the natural brightness of your instrument to shine through.

Distortion dials in the perfect amount of gain – from mild overdrive to full out fuzzy assault, and the volume control lets you dial it in just perfectly against your bypassed clean tone.

The Pro Co RAT2 Distortion Pedal Has Featured In The Following Guides...