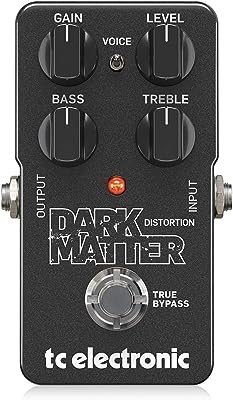 Dark Matter is the kind of pedal that you wanna go play for half an hour and end up spending half a day with. It’s musical, covers a super-wide range of sounds but stays true to its base, an all analog-drive circuit that reminisces plexi sounds with both a classic and modern edge.

Hard to imagine now, but there was a time before digital. If you think about it, many of the best distortion sounds stem from that era. Why? Well, it’s the analog circuits, they sound great and got a little more to give when you really punish them – it simply sounds more real, fuller and better. That’s the sound we love: dangerous, on the edge yet thoroughly musical. The sound that begs you to play harder, louder, faster and more.

Distortion is great, but control is key. No one wants the ice-pick to the ears or a mushy bass-laden goo. Dark Matter delivers with bass and treble knobs, perfect for dialing in sounds precisely and lightning fast.

Dark Matter distortion adds extra versatility via a voicing switch that either adds bass for a more modern sound or fills your tone with retro vibes for an old school vintage throwback that oozes classic rock on steroids.

Simply put, the Dark Matter Distortion pedal aims to give you that powerful, super-musical roar of an early plexus - A sound that will satisfy even the pickiest players out there. Well worth considering if you're looking for that '80's metal' sound.

The TC Electronic Dark Matter Distortion Pedal Has Featured In The Following Guides...