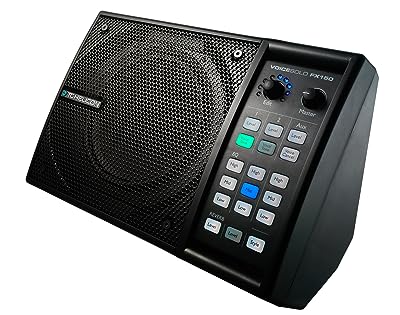 If you have no idea why anybody would want their voice to sound like a robot, or don’t get why you would want automatic harmonies added to your singing when you can just have a friend sing them, then this might be the vocal processor for you.

The quality seems to be decent, in the sense that it doesn’t seem to break down very easily, but there is one thing we’ve noticed in several reviews, and it is that the volume is unusually low, which can be devastating if you’re playing in a band and are trying to make yourself heard over electric guitars and drums. But if you are singing with acoustic guitars that aren’t that loud, it should work, or even if you’re two backup singers singing acapella.

A good thing about it is that you can attach it to your mic stand, which is very convenient.

As we mentioned previously, this vocal processor doesn’t offer any fun guitar effects, but it simply includes an equalizer and reverb plus volume control. It’s basically a mixer that you as a singer can control easily yourself.

The front panel functions as a three‑channel mixer and is dominated by a series of white back‑lit buttons, a master volume control and a data knob with indicator LEDs around it. If a channel does not have an input connected, its lights glow more dimly. The controls are used for setting levels, adjusting the reverb and tweaking the three‑band EQ, and the currently active level or EQ button shows blue so you always know what you are adjusting. The first two channels have mic/line inputs on ‘combi’ connectors, on which the use of a jack automatically switches the input to line sensitivity. Channel one’s jack input is also designed with a high impedance so that it can double as an instrument input.

Both of the mic inputs can have phantom power applied by means of a global switch on the rear panel, which also houses the two mic/line inputs, a thru XLR for channel two, and a main output that can be switched to carry the full mix (including the aux input and any added effects) or the output of channel one only. The PSU also connects here, and there’s a small power button along with a mini USB port, which is provided for firmware updates.

As expected, the sound quality doesn’t disappoint, with both clarity and level living up to expectations — in monitor applications you’ll run into feedback well before you run out of monitor level. If you overcook the input level, the Vocal Tone button will flash red as a warning. The reverbs sound pretty good (though you need to keep the level dialled back as it can quickly become excessive), and is also a useful EQ range. Switching in the Vocal Tone brightens up the sound in a pleasing way, and also scoops the mids slightly, but does also make feedback more likely.

Having reverb built into the monitor also helps and it means that you can use more of it if it helps you perform better without the reverb being sent on to the FOH system. TC are known for their high‑end reverb algorithms so it came as no surprise that these actually sound very good. It’s certainly good enough that you may choose to use the onboard reverb as your main vocal effect and then send the effected vocal to the FOH mixer. The Mic Control option is also very useful if you have a compatible microphone to allow remote effect switching, while the flexibility of signal routing also makes it possible to combine your own effected vocal with a monitor mix coming from the desk, so you can set up a ‘more me’ mix very easily.

The TC Helicon VoiceSolo FX150 Has Featured In The Following Guides...