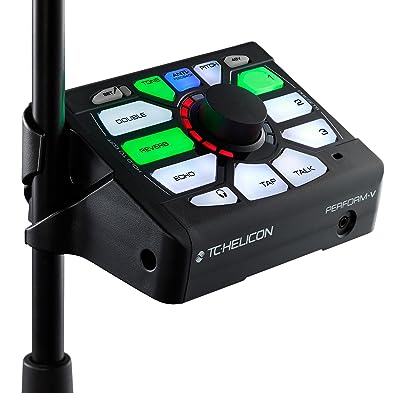 TC Helicon are known for producing easy to use products, and the Perform V does not disappoint in this area.

Let’s talk about the specific controls:

The unit has all of its main controls located on the front of the interface, making it easily accessible for vocalists during a performance.

On the left, we have the Double, Reverb and Echo buttons, which each provides 4 types of the effect. Not only this, but you can hold the buttons to do further editing to these default effects.

On the top, we have a ‘Set’ button, to engage automatic microphone input gain, allowing for a very easy mic setup. Additionally, there’s a ‘Tone’ button, which engages TC Helicon’s Adaptive Tone functionality, which essentially allows the unit to automate the use of EQ, Gating, Compression, and De-Essing based on your voice.

Next to the ‘Tone’ button, we have the ‘Anti-Feedback’ button, which as you can imagine, engages an algorithm to automatically prevent feedback from occurring. This is especially useful if you’re a solo performer and you have your speakers positioned behind where you’re singing from, which would usually cause feedback, but not with the Perform-V.

And then on the top right, there’s a ‘Pitch’ button, to engage auto-chromatic pitch correction, and a ’48v’ button, to activate phantom power, to power a condenser microphone.

At the bottom, there is a ‘Talk’ button which disengages all effects, to allow for vocalists to speak to the crowd in-between songs, without any distracting vocal effects being heard.

Located on the back of the interface are all of the connectivity ports, including (from left to right), a power input jack, mini USB input for device updates, an auxiliary input, a port for an external pedal, and finally 1 x microphone XLR input & 1 x microphone XRL output port.

In addition, the Perform V can be used in a more, hands-off approach, with its ability to integrate with the TC Helicon MP-75 microphone or the MCA100 Mic Control Adapter, to convert any microphone. All of these solutions allow for external ‘Mic Control’, so you can roam around the stage whilst engaging and disengaging effects.

Also, there may be times when a hand-operated vocal effects unit is not ideal, i.e when you have an instrument in your hand, and because of this, you can add a ‘Switch-6‘ accessory foot pedal to let your feet take control instead.

The TC Helicon Perform V Has Featured In The Following Guides...