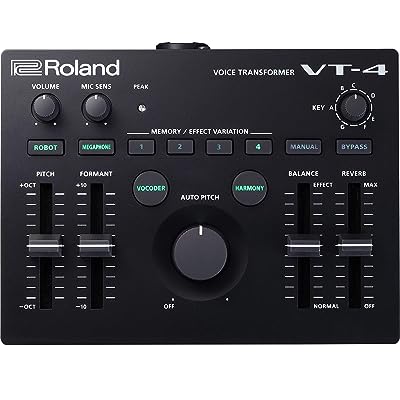 Once upon a time there was a vocal processor from Boss called the VT1 and it provided a convenient toolset of voice effects, from gender reassignment to Metal Mickey robotics. By performing its few tasks well and with minimum fuss, it gained something of a cult following. Joining Roland’s Aira range as the junior member is the VT4, an updated version of the VT1, but built for the same instant gratification as its predecessor.

Roland’s BOSS VT-1 Voice Transformer has been used on hit tunes and albums by major acts including The Knife and Air. The VT-4 is unmistakably an AIRA product. It has the same solid build quality, sleek looks, green lights, brushed black aluminium front panel, black plastic case and green day-glo trim as its TR-8 and TB-3 siblings and it’s also very compact too.

The VT-4 doesn’t stray far from the VT-1’s concept in terms of functionality and the hardware itself – in fact it’s strikingly similar if you compare the two, though thankfully the garish orange and blue colour scheme has departed!

Plug and play is the order of the day and having connected my AKG D130 mic, it was just a case of adjusting the sensitivity of the input, keeping a wary eye on the peak LED, then letting rip. The central encoder’s 10 positions each select a different processing algorithm and just three user memories are provided to store your favourite combinations of the front panel controls. This is considerably less generous than the VT1 and since one potential role for the VT4 is for voice‑over work, more memories would have been much appreciated. Fortunately, the VT4 is very hands‑on so this limitation may not prove too irksome.

If you have a spare sustain pedal it can be used to toggle the bypass status, and in one of only a handful of configuration options, you can change its polarity to suit the type of pedal you have. Finally, if you don’t look carefully, you might miss the mini‑jack headphone socket and additional mic input under the panel at the front. Using the pitch and formant levers together generates a wide variety of pretty transparent vocal modifications. It’s never been easier to morph from Barry White to Barry Gibb! Certainly the results are cleaner than earlier Roland technology, such as Variphrase, and with the robot button always handy, Direct might be all the processing you ever need.

The next two options are Auto Pitch 1 & 2. Described as pitch‑correction, their attempts at following the frequency of my incoming voice were met with mixed success. Admittedly, it’s been many decades since I was in my vocal prime and time hasn’t been kind to my vocal cords. When I trotted out a rusty bit of Palestrina, the VT3 struggled to identify the pitch, let alone follow it reliably. In contrast, I plugged in my theremin instead of the mic and, perhaps due to the consistency of delivery and tone, the process worked far more reliably.

Auto Pitch 2 is instantly more artificial, its electronic artifacts not unlike those of Variphrase. As my latin motet renditions slipped effortlessly into Cher (not a phrase I thought I’d ever need), the blatant Auto‑Tune character became more unruly than ever. Auto Pitch 2’s response to vibrato was to glitch wildly and I never fully gained control over the tuning. I suspect that to get the best out of either of these modes, you need a voice that’s already pretty good and I got my most interesting output by abandoning the voice altogether and using other sources, such as a drum machine.

In use, the VT-4 is great fun just like the old VT-1 and in particular, the new Synth, Bass and Lead modes (that turn your voice into a synth, bass or lead sound) are great for anyone who wants to record or perform synth lines but that can’t play a keyboard. Then there’s the Scatter effect which is great for real-time chopping and twisting of audio and beats, plus the onboard reverb sounds great on all sources, though it’s a shame you can’t alter the time, size or type. The VT-4 is in its element when you start pitching up or down beats/instruments and samples or when you want to harmonize with yourself, plus the effects such as Radio and Megaphone though clichéd, are handy to have on tap.

To sum up, the VT-4 is a mixed bag. It’s certainly fun messing with your voice, it’s a great box for voice-over artists and the built-in USB Audio interface is a real bonus. However, for pitch-challenged singers (like us), the Autopitch and Vocoder presets are a little disappointing compared to the competition. This is an easy one to sum up: the VT4 is much prettier than the VT1 and considering its price, accessibility and bundled audio interface. I predict this is one of the best vocal harmonizer pedals available and will make a lot of vocalists very happy.