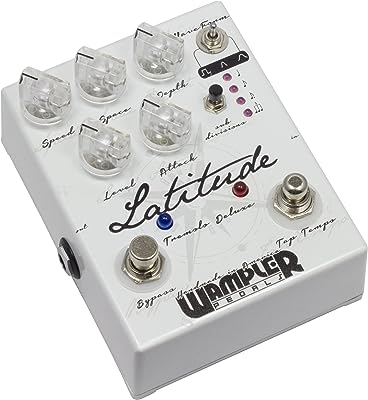 From the sweet shimmering tremolo of yesteryear to helicopter choppiness of today, the tremolo has been a staple for guitar effects. With one foot in sweet vintage tremolo tones and one foot in more modern helicopter chops, the Wampler Latitude Tremolo Deluxe offers the best of both worlds.

Finally there is a Tremolo with all the bells and whistles. This tremolo pedal was designed for the player that wants a plethora of tremolo options underfoot. The Latitude utilizes digital technology to control a completely analog guitar signal path; bringing you the best of both worlds.

With its tap tempo controls and multiple time divisions – the Latitude is easy to sync with whatever song you are playing. Have a drummer whose time keeping is a little off? The tap tempo control will regulate your tremolo speed on the fly. The Latitude Deluxe offers players the choice of four divided sub-divisions: Quarter notes, eighth notes, dotted eighth notes, and triplets. With your choice of 3 waves forms (Peak, Sine, and Square) you can keep your tremolo classy or get it as nasty as you want.

Thanks to the volume control option, your tremolo effect won’t get lost in the mix. The Latitude also features the Wampler standard true by-pass so your guitar’s natural tone won’t be affected when your pedal is not engaged.

From true vintage mojo to modern syncopated pulsating – the Latitude Deluxe was designed to cover all of your tremolo needs.