Guitar effects are very popular in the world. The best tremolo pedals under $100 create simple yet amazing effects. In short a tremolo guitar pedal changes the volume of a signal.

Tremolo effect are among the simplest and oldest guitar effects on the market. Furthermore, they are used in almost every popular genre of music.

In addition to being so simple to use, tremolo effects pedals are very versatile and can do a lot to your tone. Simply use one as part of your effects chain and hear the difference.

What Is A Tremolo Pedal?

A tremolo pedal under $100 is a tool that modulates a guitars original sound. It does this by altering the volume of the guitars sound. It increases and decreases the sound again and again, resulting in the tremolo effect.

Tremolos are some of the most prolific and iconic sounds known to come from an electric guitar. Tremolo pedals under $100 can have variable or preset rates of effect. Some are easy to use and some offer total control. It all depends on whether you want a hands on or hands off approach.

How Does A Tremolo Pedal Work?

A Tremolo pedal under $100 is able to create this modulation effects by simply varying the volume levels resulting in a rhythmic change. This change is repeated at a rapid rate. The equivalent of you manually turning your volume control up and down in rapid succession, again and again and again.

Tremolo pedals under $100 don’t all sound the same. Some devices alter your tones waveform while others have more complex features. These features vary from model to model however the indication of ‘enhanced features’ is usually by the tremolo pedal having several control knobs. Having 2 dials or less usually means the tremolo pedal is quite simplistic in design and easy to use. Some have 4 or more controls and these effect pedals usually have more modes and choices at hand.

Tremolo pedals can have true bypass which is great if you want the effect to stop immediately when you disengage the pedal. However if you’re looking for a subtle fade out, a buffered bypass would be more suitable.

Tremolo pedals under $100 can vary greatly when it comes to the sound that each model is able to create. These devices alter your tone’s waveform, but some models have only two dials, while others can have four or more. You can choose a tremolo pedal that has some basic waveforms or you can search for a pedal that has more complex features. 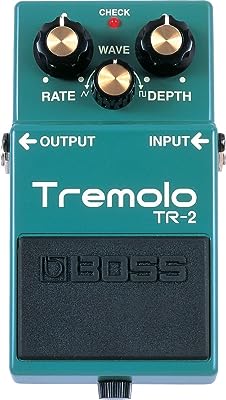 The TR-2 tremolo pedal justifies Boss's reputation as one of the biggest authorities of guitar pedals in the world.
Buy From Amazon.com

The Boss TR-2 tremolo pedal has many positive aspects. The main being with it’s particular set of controls, one can navigate through a few different vintage style sounds as well as tweak those sounds to suit the style & other equipment they are playing with.

Overall, the TR2 is excellent value for money, offers a good sound, is tough & readily available. 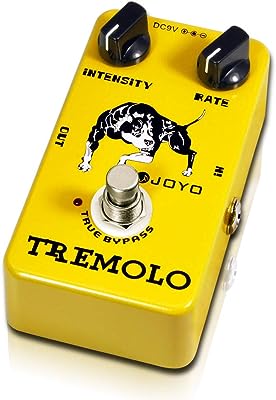 The JOYO JF-09 Tremolo guitar effects pedal tries to replicate the tremolo of the beloved classic tube amplifier. By using the same photoelectric tube circuitry as the trem in those amps of old.
Buy From Amazon.com

This Joyo Tremolo pedal uses the same photoelectric tube circuitry as the tremolo used in those classic amps of yesteryear.  Simple design makes it easy to adjust the tone with only 2 parameter pots –  Intensity and Rate.  You can go from a very subtle, swaying tone, to the super choppy Bloc Party sound with both pots maxed out.

On the left, a rate knob controls how quickly the volume swells fluctuate, while the right depth knob controls overall dynamics. The Tremolo guitar effect pedal from JOYO also has as important extra for your live playing or recording needs: fortunate for your rhythm sound, the led on/off indicator pulses with the signal modulation rate, it is a great way to set the rate speed before you start to play. The guitar effect pedal from JOYO features True bypass and with solid 1/4-inch connectors make this pedal professional and reliable when it comes to signal integrity, great modulation tone and will last a long time.

The sound is understated when the depth is low and somewhere between magical and psychedelic to a choppy stutter when it’s all the way up. Perfect for adding some emotion to your guitar tone.

The Joyo Tremolo JF-09 is an optical circuit tremolo like in the old Fender amplifiers used. All analog, with gradual smooth oscillation. No need to buy a pricey pedal, this baby will do the job well when you need that subtle wave for ambiance. Speed can go from a barely noticeable pulsing all the way to a fast choppy stutter.

A nifty feature is the LED light blinks at the rate of the current tremolo speed so makes adjustments easy and intuitive.

Great bargain Tremolo that will give boutique pedals a run for their money.

Analog Circuit tremolo pedal. Classic optical tremolo with huge range of speeds and depths. Very clean Tremolo sound, and form a slight Trembling round wave to a violent shaking of the square ware has performed for good job.
As the manufacture seller, we have strengthens the PCB and SOP production quality and offering high quality pedal at unbeatable price.

This mini guitar tremolo pedal has almost 100 positive customer reviews at the time of writing this recommendation. It’s an eye-catching pedal that will take up very little room in your setup but give you a classic tone you and those listening are sure to enjoy. Take a look. 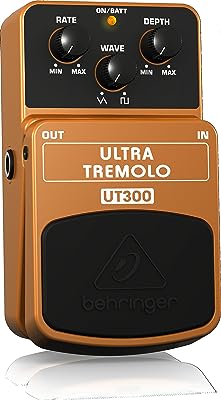 When you’ve got to have the classic tremolo made famous by vintage ’50s amps, get the ULTRA TREMOLO UT300. Like Waves Lapping at the Shoreline. The classic surf music of the ’50s and ’60s might not have even happened if tremolo hadn’t come along.

Vintage amps produced this intriguing effect by pulsing the volume of the instrument signal at a user-adjustable rate. The UT300 pays homage to this legendary sound, bringing it up to date for modern surf freaks.

With its dedicated RATE, WAVE and DEPTH dials, you can shape a pulsating tremolo that nails every sound from rowdy rockabilly and surging surf to modern space-rock.

A red LED tells you when the effect is activated, and you can power this groovy stomp box with either a PSU-SB DC power supply (not included) or a 9 V battery. A top-quality On/Off switch maintains excellent signal integrity in bypass mode. Ride the wave of classic tremolo aboard the ULTRA TREMOLO UT300. And the best part you’ll still have money for board wax and gas to get you to the beach if you’re so inclined.

This is an affordable tremolo unit that offers great sound quality with a deep sensuous spring reverb. You have to take the Behringer UT300 seriously, we have. Check it out for yourself. 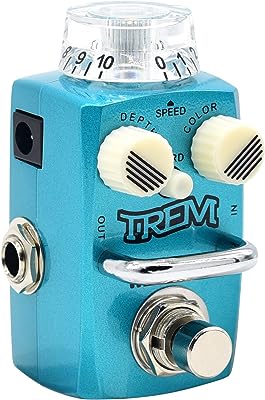 The Hotone Skyline Series TREM optical tremolo pedal will deliver pulsating guitar tone. Whether it is surf you are after or something a little scarier, TREM will give you the lush, liquid waves you’re looking for. The classic tone of photoelectric tremolo, with wide range adjustability and smooth, well-proportioned pulsing character.

Build-wise, the pedal’s spec is way beyond what you’d usually expect from a stompbox of this size. There’s a hefty zinc alloy enclosure, a rod to protect the knobs from your size 10s, while the switching is true bypass. Inspired by the legendary Fender Twin Amp*, the special circuit design ensures the consistency of output volume at different speeds. Additional EQ circuit offers more options for sound decoration.

What a little pocket rocket. Despite looking like a cool little robot face this tremolo pedal is built like a tank. It’s not going to take much room on your pedal board so if you want a good value tremolo pedal and a mini one is your preference. Give the Hotone Skyline Trem a chance. 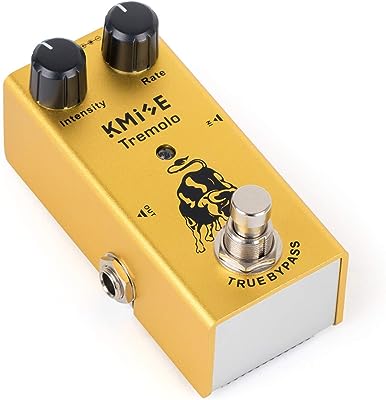 The Kmise Mini Tremolo guitar effects pedal is hugely popular and has an overwhelmingly positive plethora of customer reviews.
Buy From Amazon.com

Developed with the code to reduce noise swells common with tremolo circuit, you get the quietest effect possible with this pedal. True bypass switching maintains pure signal flow when the tremolo pedal disengaged. Aluminium alloy body makes this tremolo pedal safe to transport .

This tremolo pedal has a small size body, light weight, suitable for out side gigs. This is the tremolo of the beloved classic tube amplifiers–using the same photoelectric tube circuitry as the term in those amps of old. Intensity and Rate knobs make it easy to adjust the tone and vibe.

“Very little difference in more expensive pedal when dialed in.”

“The Tremolo Pedal is small in size but does its job well.”

“All in all this is a great buy and seems to be just the ticket for those looking for a proprietary pedal for the Tremolo Effect.”

“I really liked this little Tremolo pedal from Kmise.”

“This pedal sounds great on bass.” 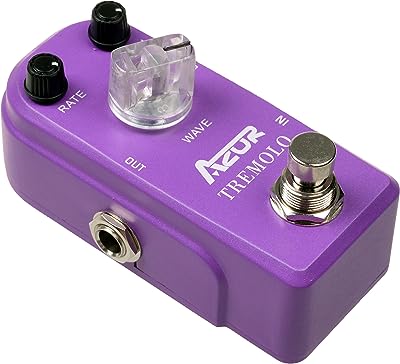 As you can see, AZOR AP317 TREMOLO Guitar Pedal Effect have a Classic Mini size, convenient and durable. True bypass switch lets your instrument’s signal pass through a non-electronic bypass line when the effect is disengaged, feeding your amp with direct, unaltered signal from your instrument. There are three function knobs, ie RATE, DEPTH and WAVE. You can just control three function knobs and choose the model you want to make your own music tone. Enjoy your own fun and colorful life.

If you’re after a small sized tremolo powerhouse then this pedal might be the right choice for you. Check it out! 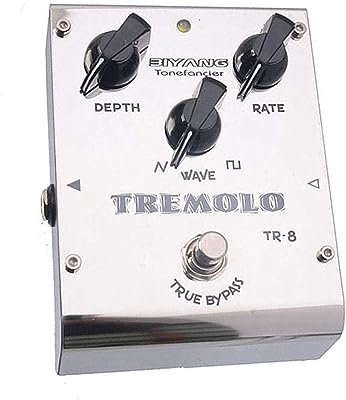 Biyang TR-8 Tremolo guitar effects pedal is a good tremolo for the price. If you can forgive it's larger than average footprint, it's a great piece of kit.

Tonefancier series Pedals are made from stainless steel case and with mirror surface treatment which is beautiful and elegant. Every pedal of Tonefancier series adopts the WIMA capacitance from Germany which is fast speed and low loss, with pure timbre. Besides, all the Tonefancier pedals use high-quality metal sealed potentiometer, which work in the dust-free environment to ensure the long-life run.

Biyang TR-8 is one of those pedals that bring fun to any rig and impact your performance a great deal. It delivers wonderful sound at a fraction of the price and I am sure, any practicing musician will appreciate its capabilities.

Best Tremolo Pedals on The Market

Guitar effects are very popular in the world. The best tremolo pedals on the market create simple yet amazing effects. In sh...