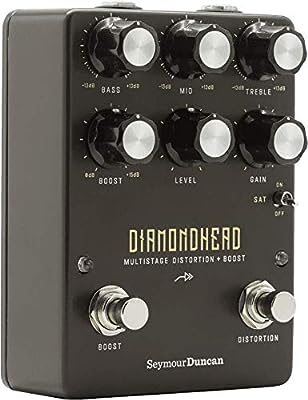 Diamondhead captures the power and versatility of that era-defining rig in a package that will find a space on any pedalboard. Whether you're running it into a clean platform amp or into the frontend of an overdriven tube amp, the Diamondhead provides the flexibility and tonal clarity to authentically capture the sound that defined an era. It all starts with the drive - from breathy and raw medium gain sounds to screaming high-gain harmonics, Diamondhead is deep and three- dimensional, with clarity and touch response. Three powerful active EQ controls maximize the potential of the gain section. A tightly defined bass control boosts and cuts at 80 Hz with surgical precision, making the low end huge, but never muddy. A broader mid-range control set right at 800 Hz allows for massive scooped chunk, hyper aggressive modern attack and everything in between. The Treble control set at 6 kHz adds sizzle, cut, and attack.

Diamondhead can be used in a variety of ways. It works great in front of a clean amplifier, injecting it with the sound of a cranked amp stack. You can also punish the front end of an overdriven amplifier, soaking your tone in gorgeous layers of saturation. Many guitarists here at Sweetwater have also achieved seriously brutal tones by running Diamondhead straight into an amp's effects return, effectively transforming it into a hot-rodded high-gain preamp. Regardless of how you use it, this stompbox delivers an ear-grabbing, aggressive sound with loads of bite, body, and character.

The SAT Switch (based on our 805 Overdrive) adds a 24 dB pre-gain boost that tightens up the low end for more aggressive and defined attack. Subtly rolling off lows and highs it allows the mid-range to cut through creating chewy, harmonic saturation. Independent from the Drive section, the Boost (activated with the left footswitch) offers 0 to 15 dB of gain and can be used as a lead boost or to push an amplifier on the edge into overdrive. Try using it with a slightly dirty amp as the first gain stage and adding the Drive section for your highest gain sounds.

If you want to dial in your tone with surgical precision, Diamondhead is the right tool for the job, thanks to its flexible 3-band EQ. The Bass control employs a super-tight curve at 80Hz to add girth to your tone without any mud or flabbiness. The Mid control utilizes a broad curve at 800Hz to create colossal scooped chunk, hyper-aggressive attack, and all points in between. And the Treble control, set at 6kHz, adds sizzle, cut, and articulation to your playing. To complement the EQ, Seymour Duncan has included a SAT switch based on their 805 Overdrive. This function adds a 24dB pre-gain boost that subtly rolls off lows and highs, tightening your lows and allowing your mids to cut through. The chewy, harmonic saturation that the SAT switch adds to your sound is downright amazing!

Diamondhead also shines as a pre-amp. By running it into the effects return of your tube amp, or in front of the PowerStage power amps you'll be rewarded with a hot-rodded high gain amplifier tone with body, bite and character.

Of course, it doesn't matter how many cool features Diamondhead has if it doesn't fulfill its purpose - GAIN! And fulfill that purpose it does, from raw medium-gain crunch to screaming high-gain grind. Palm mutes chug, pinch harmonics squeal, and power chords resonate with glorious harmonic content - all while retaining maximum clarity and touch response. You also get an independent Boost footswitch that kicks in a variable gain boost of up to 15dB. This works great as a lead boost, or you can push an amp on the brink of overdrive into full-on saturation.

If you've gone through a pile of overdrives, distortions, and boost pedals searching for that quintessential 80's metal or hard rock tone and haven't been satisfied, make Diamondhead the heart of your rig. Versatile enough to handle any covers set, precise enough to surgically dial in your own tone - it captures the rock 'n' roll spirit of a high gain head pushed to the edge.

So what's our vertict? The winning feature of the Seymour Duncan Diamondhead is the boost element. While other pedals have decent boosts, the quality of the Diamondhead's boost is much more appealing. It not only works independently of the gain feature but also has a more favorable impact on the overall sound of the pedal when engaged. You can definitely achieve heavy chugging tones when you activate the boost switch. Perfect for those heavier metal rhythm chug tones. If you're looking for a superb boost pedal that comes with some very nice other features. Give the Seymour Duncan Diamondhead a chance.

The Seymour Duncan Diamondhead Has Featured In The Following Guides...