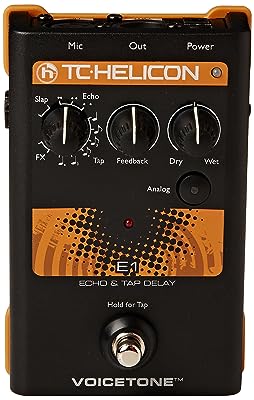 The TC Electronics Singles VoiceTone E1 looks cool and is easy to use since it doesn’t have too many weird effects you won’t use anyway.

This is another one trick pony that basically only does different kinds of echoes and lets you change your tone and make it dry or wet. It’s good to have if you’re performing in a place with poor acoustics and you want it to sound as if you’re singing in a church.

The company which is TC Helicon generally need no introduction when it comes to discussing vocal effects technology, as they’ve been pioneering the industry since the early 2000’s when the company was initially founded. TC Helicon was recently acquired in 2015 by Music Tribe, who is the parent company of Behringer, Bugera, Midas, Turbosound & Klark Teknik.

None the less, in the 19 years that the business has been in operation, they’ve managed to produce several well-known effects units, including the VoiceTone series (which the E1 unit is part of), alongside other series such as the VoiceLive series. We’ve constructed our product review of the VoiceTone E1 in a way which not only talks about its unique features, but also includes high-quality images, demonstration videos and informational videos.

The right control knob is used to adjust the level of dry (raw input) and wet (echo) signal; Hence, turning this over to the left will provide less echo in the final mix, and turning it over to the right will provide more echo in the output mix. The middle control knob ‘Feedback’, controls the length of the echo repeats. The left control knob is used to select 1 of the 13 different delay styles, which include slapback/flutter echos, non-tempo matched echos, timed echos, special effects echos and much more.

The Voicetone E1 has an extremely useful feature where users can control the E1 directly from their microphone, which is called Mic Control™.

Finally, it has a large footswitch which is used to engage and disengage the unit’s effects, especially useful during a live performance, where you can engage and disengage the effects easily, without having to bend down. Therefore, if you’re looking for a unit which offers a lot of delay/echo styles and settings, the VoiceTone E1 is a fantastic solution for you. Lets not forget, as with all of TC Helicon’s products, the VoiceTone E1 comes with a 3-year warranty.

The TC Electronics Singles VoiceTone E1 Has Featured In The Following Guides...