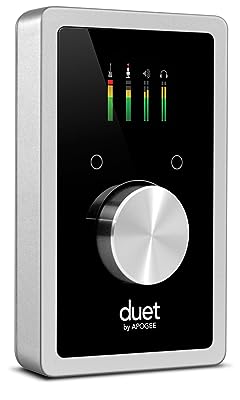 The Apogee Duet 2 is the world’s best-sounding and most convenient computer DAC for desktop audio. It’s also a professional monitor controller and headphone amplifier. The best part is it all sits on your desk with one big, beautiful knob for easy fingertip control. Building on the success of the original Duet, while taking into consideration customer feedback, Apogee has set a new standard in A/D conversion for home and project studio with the Duet 2. Simply put, after several years of working at home with an original Mbox, opening my first session with the Duet 2 was akin to listening to the song with brand-new ears.

The Apogee Duet is the Apple MacBook Pro of the Audio Interface industry. It’s sleek design is highly attractive, very durable and extremely portable. Perfect for the professional musician who wants high-quality recordings in the studio and on the road.

The Apogee Duet is the perfect audio interface for anyone looking for more inputs/outputs than the Apogee One. Whilst it doesn’t feature the same in-built microphone that the Apogee One has. It has legendary status microphone pre-amps and internal circuitry, for that high-quality sound.

There are cheaper audio interfaces than those provided by Apogee across their range but the ﬁrst thing to note is that if you’re Mac-based, you’ll struggle to ﬁnd a company whose approach is so tailored to Apple’s product-range, with rock-solid integration guaranteed. While we always think break-out cables don’t provide the most professional-looking solution. We’re aware that this is simply personal taste. The implementation of a combined cable here makes perfect sense, allowing the Duet 2 unit to ﬁt snugly in a laptop bag.

The audio quality of Duet 2 is extremely good too, blowing most of the competition away not just among the array of cheaper interfaces available but also out-performing some of those retailing for higher prices.

The Apogee Duet is a stylish, AD/DA audio converter that provides 2 analog inputs with mic preamps and selectable 48 volt phantom power for connecting microphones, instruments or line-level equipment. 4 analog outputs including 2 balanced 1/4” outs for speakers or outboard gear, 1/4” stereo headphone output. A USB 2 connection to connect to a Mac; a MIDI port; and a digital connection for iOS devices.

Apogee units are pricier than similar interfaces from companies like Edirol, Steenberg, ProSonus. However the Apogee claim to fame is outstanding audio quality and great build quality. I found the Duet easy to set up and configure. The controls and the built-in screen simplify adjustments and the Duet looks great on the desktop. The only downside is that the Duet costs about twice as much as competitive units.

A big benefit of the Duet is that it works on both Mac and iOS devices. Giving you the ability to capture high-quality audio on your phone.

Overall, the Apogee Duet is a fantastic audio interface for those musicians who are fine with having only 2 inputs/4 outputs. Ideally, we imagine it’s suited to musicians who are on the move and want to record high-quality audio, as well as those who might not want the larger interfaces and want the premium Apogee preamps at a more affordable price (in comparison to other Apogee products).